Why Enterprises Should Hire Python Developers 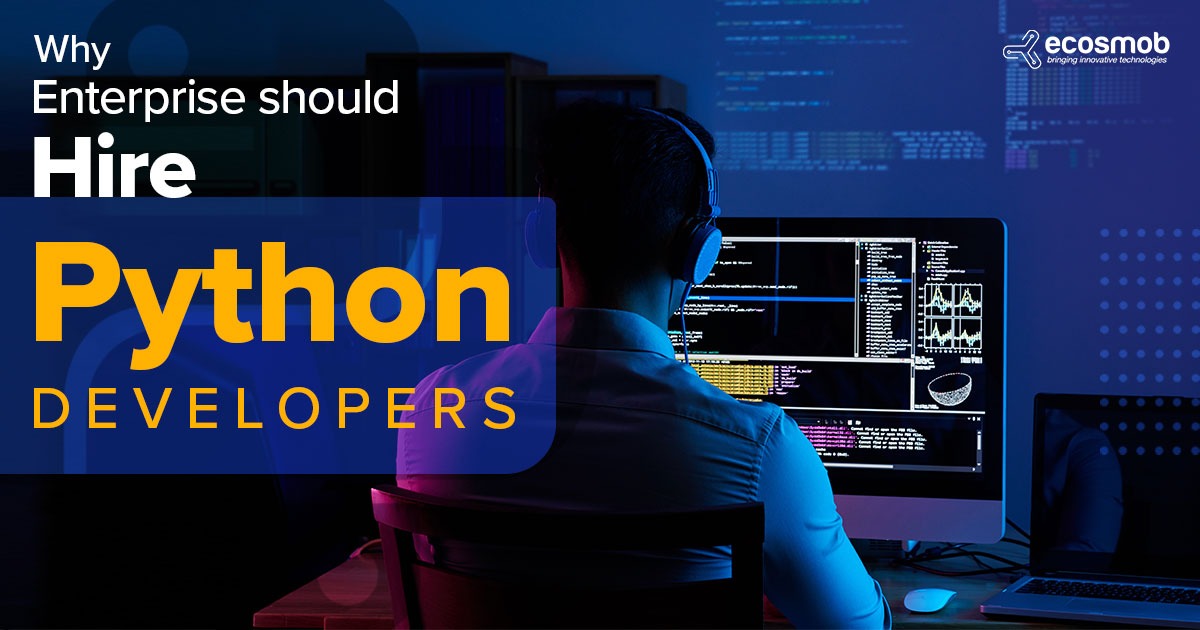 There are a host of coding languages that are deemed worthy of building great products. So how does an organisation pick the best? If there’s one language that has become a craze on web development frameworks in the shortest possible time, it’s Python. In fact, it’s been voted the number one coding language most frequently.

Dating back to the 1980s, Python is one of the oldest programming languages out there. When Python was first conceptualised, it was inspired by the ABC and Modula-3 languages. Since then, it has come a long way to the 2.0 release, when it became an open-source project. Python has been gathering a huge, professional community that has been constantly improving and innovating the technology ever since.

When an organisation picks a programming language, they consider how robust and responsive the end application is intended to be and the volume of coding and complexities it may involve. Being an object-oriented programming language that is focused on rapid action development (RAD), Python has been a first-stop for large and mid-sized organisations, as well as start-ups. By opting to build their websites with Python, enterprises can lower bounce rates and speed up loading times.

Application programmers and web developers also love Python for many reasons. The biggest advantage of the language is that it is easy to learn, which makes it a great choice for beginners. In fact, for developers who start out with Java, C, or C++, there is almost no learning curve at all. Python’s strong emphasis on readability and efficiency also makes it a popular choice of programming language.

In this blog, we will understand what makes Python a superior programming language, why enterprises should use it for web development and why they should hire Python developers.

Python is an adaptable and efficient programming language that can conform to a programmer’s coding style, be it functional or object-oriented.

Python for websites offers dynamic typing capabilities. This multifaceted programming language lets developers create system applications that are built with graphics, games, command-line utilities, web applications, and more. Another benefit of creating a website with Python is that you can use and distribute it for free.

A developer survey conducted by Stack overflow in 2019 rated Python as the second most loved programming language and among the languages that were the most in-demand. Python is what developers want to learn today.
Python has tremendous traction in the world of code writing. Some of the world’s biggest enterprises, including Red Hat, Facebook, Google, Dropbox, Microsoft, Mozilla, and Intel, have their tech stacks built with Python. Besides, social media platform Instagram relies on Python to allow its 4 million daily active users to photograph, edit, store, and share their stories in personal digital albums. The music streaming app Spotify uses Python to manage its radio and discover features.

Python is an ideal fit for a variety of web projects, from simple to complex. It’s also made inroads as a programming language of choice for web development in different industries, including travel, healthcare, transportation, and finance. where it’s used for web development, software testing, scripting, and generation.
Besides web development, Python is also used in various complex fields, including Artificial Intelligence, Deep Learning, and the Internet of Things.

Why use Python for web development?

If you need a web development project to be completed fast and on a budget, Python is the way to go. Even though Python is on the rolls of programming languages used by A-list companies, it is also perfect for startups and bootstrappers as it turns processes quicker and easier.

Web development is a two-pronged process. It involves a front-end, which includes interfaces that that interact with the user, and a back-end, which remains hidden from users but contains the business logic and interacts with a database. Python inserts itself into web development as a back-end language and is normally used in combination with a front-end language – JavaScript being the most popular one – to build efficient tech stacks

The primary reason for using Python in web development is that it is an adaptable, multifaceted, and extremely efficient programming language that offers dynamic typing capabilities. Python enables web developers to build scientific applications as well as system applications that bring in features like graphics, games, and command-line utilities.

Python is wildly popular because it is open-source and can be used and distributed for free. All the coding information that is required to work on Python is available on the Internet. This means that copying, embedding, and distributing Python in your products is unrestricted. Python also works with a vast set of robust libraries. These features make the programming language extremely user-friendly in the digital systems world and capable of building high-functioning and successful products.

Python web development in combination with platforms such as Raspberry Pi enables developers to even build their own devices such as phones, cameras, radios, and games.

Great tech products are built by great teams. Since Python is a stable, secure, and scalable code, Python developers can help organisations bring their product visions to life, along with providing on-time delivery, and high productivity.

Whether you are creating a desktop application GUI, or are working on your front or backend web development, Python brings a lot of benefits that can make your project stand out from the crowd.

Who is a Python developer? A Python developer is a generic term that is used to describe a technology professional who uses the language to build web applications, create scientific models, handle analytics, and other complex calculations. Pro coders in Python usually come with a solid knowledge of C#, Java, PHP, and JavaScript, and are skilled in Python development, code audit, and integration.

Why should enterprises hire Python developers? Python is an all-purpose language that can be used in various different ways. Besides web application development its most notable utilisation are in data science and machine learning.

Python developers are a good fit for data science and analytics companies as they can decode vast amounts of data in order to make their systems smarter and insightful. These applications also usually come with a consumer-facing, web component.

Python is a great language for data science and backend-related tasks. However, it is a well-known fact among technology industry circles that Python developers, who have the added advantage of being proficient in data pipelines and ETL, are extremely difficult to staff if you aren’t a Google or an IBM.

Python developers can fit many roles when it comes to building tech stacks. Let’s list some of them:

Data Scientists: They can decode and transform structured and unstructured data using scientific methods, processes, and algorithms to extract knowledge and produce insights.

Web developers: They create web applications using the client-server model as well as create RESTful APIs.
So how do enterprises go about the complex task of hiring the right-fit Python developers? There are a lot of resources out there, but what organisations need to do is separate the wheat from the chaff. What should they look for in an adept Python developer?

In the area of web development, proficient Python developers should be able to:

In the sphere of AI, machine learning, and deep learning, Python developers should have:

Enterprises can either hire Python developers as in-house employees or outsource qualified professionals from third-party providers. Both options have their pros.

For instance, outsourced developers are easier to access and it is easier to identify and bring onboard senior-level resources. Also, outsourcing means there are no hiring roadblocks, efforts to retain new employees, hiring expenses, or training expenses. This reduces managerial efforts and optimises resource usage during both peak and low work phases.

In-house Python developers, on the other hand, provide organisations with easier control over development processes and reduced security risks and communications blockages

The success of any technology depends on the community that is built around it. Python’s vast community resource is one of its biggest advantages. Thanks to a strong user base, developers can easily collaborate, build new innovations, troubleshoot, and solve programming problems. This is one reason why Python has been around in the programming world for so long and continues to thrive.

Python users are known to share their findings and new ways of using the language with the larger community. This way, the entire Python user world is able to test the boundaries and abilities of the language and allows them to become adaptable and flexible.

If you still aren’t sure why you should use Python, let’s go over its biggest benefits.

Even though Python’s simple syntax makes it an ideal stepping stone for beginners into the world of programming, it is a powerful language that is the foundation behind the tech stacks of some of the world’s biggest brands.

Hiring a team of developers to build Python-powered applications can provide end-to-end benefits and high productivity and efficiency to enterprises, especially when it comes to working on short deadlines or on a budget.

Contact us to get free consulting from our team of expert python developers. They will help you work out the most cost-efficient, quick, and scalable way to develop your custom-built application.