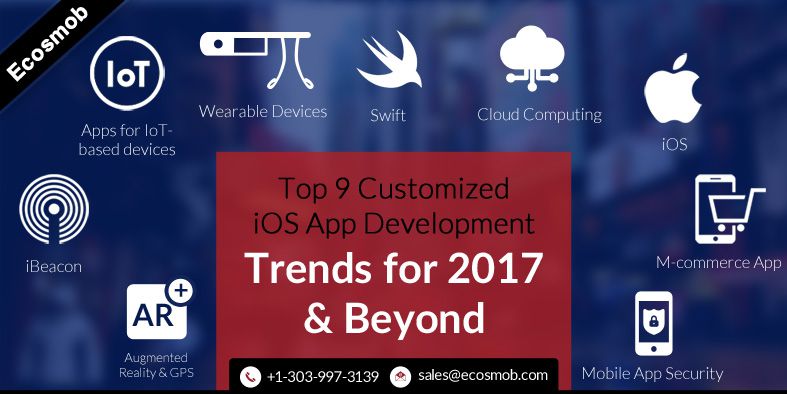 As per the latest research in the Quarter 1 of 2017, Apple’s App Store has 2.2 million applications available. This makes it the 2nd largest app store in the world. With the increasing demand for the iOS applications, iOS is going to see major app development trends in 2017 and beyond:

The sensors of GPS & Beacon are integrated in various home appliances and automobile devices. With iBeacon in latest Apple OS version 7 (iOS 7), the Apple devices can communicate easily with the devices having GPS & Beacon sensors. This makes the iOS apps more smart and thus, it increases the demand for the customized iOS apps in the market.

Apple has been the most favorite brand among the enterprises. And, due to the benefits of choosing iOS for the enterprises makes it more reliable and favorable for the business applications used for marketing and commercial purposes. With the invention of iBeacon and GPS integration, Apple products will grab more attention as it will be easy for the iPad tables of the enterprises to be connected to various other office appliances.

Around 2015, Swift programming language became the open-source one. Most iOS developers have already chosen Swift over Objective-C as for Swift platform can support in developing more advanced & customized iOS apps.

Augmented Reality uses GPS to offer amazing experience to the Apple customers. Specifically, if we look at the gaming industry, augmented reality and GPS has made a drastic impact on the 3D game lovers. Soon the iOS developers will need to work on customized AR-based iOS apps for gaming industry, giving more emphasis on the security part.

Well, Apple is highly famous for its advanced level of security infrastructure. But, as I said in the earlier point, iOS apps will need more security. More and more intense technology like iBeacon and augmented reality, connecting with GPS would need to be more focused on security issues. The reason behind this is that, the more people will depend on their devices for managing their personal tasks, more will be the need for security of the mobile apps.

With iBeacon and augmented reality apps, the Apple has already shown to the world that it is slowly and gradually entering the world of IoT. Apple has launched iBeacon apps for commercial purposes. Soon, it will create a market where the demand for IoT-based applications will increase to a great extent challenging the custom iOS developers to keep up with the pace.

Most of the users loves to access multiple apps on multiple devices. Also, if we talk about the employees of a particular organization, it becomes very easy to access mails through commercial Gmail accounts. This is cloud computing, which has now become very important while considering app development. Increased demand of iOS apps in the enterprises also increases the focus on developing cloud-based iOS apps.

I don’t think you would have missed out on Apple watches. The day when it was launched, there was increase of 80+ million in iOS app download numbers. Looking at the craze of wearable devices, it becomes immensely necessary to focus on wearable devices while developing customized iOS apps.

What are your thoughts on these customized iOS app development trends? Do share in the comment section below.