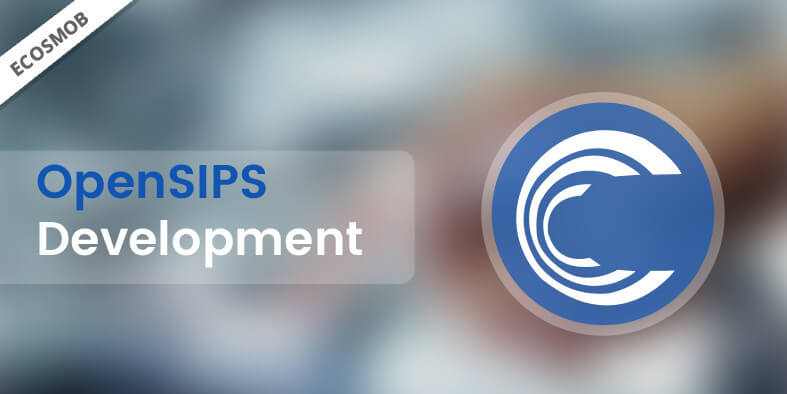 Now, you must be wondering,  What is the role of OpenSIPS?

We will introduce its explanation under the following heading.

OpenSIPs is a proxy/server that supports voice, video, instant messaging, presence, and other SIP extensions in a very efficient manner. It was initially developed by the Fokus research institute in Berlin, Germany. After several tests and trials, today, OpenSIPS is a vital component of SIP-based VoIP solutions. It has a flexible plugin model for third-party applications that can be easily created and plugged into the server.

OpenSIPS development facilitates multiple usages in VoIP, such as developing softphones that enable call recording. The service providers also radically use OpenSIPS to construct SIP appliances—for instance, SIP firewalls, load balancers, and session border controllers (SBCs). Hence, When you need a blend of speed, portability, scalability, flexibility, and the capability to run in environments with low computing capacity, OpenSIPS development services are the perfect solution. OpenSIPS is capable of handling thousands of users with a single server. It is the reason OpenSIPS is a favorite among VoIP providers and embedded IP PBXs with low processing power.

OpenSIPs software development offers an array of features. Some of its key features are-

The dialogue module offers dialogue awareness to the OpenSIPs proxy. The functionality of dialogue support is to keep track of the current dialogues and to provide information about them.

OpenSIPs software enables you to block calls from specific IPs by simply blacklisting them. Blacklist check protects you against VoIP fraud and minimizes abuse on the publicly accessible PBX.

Security is one of the primary features of a SIP provider. OpenSIPs development comes with an extensive list of attacks like toll fraud, denial of service (DOS), and privacy violation. DOS/DDOS can be responsible for the failure of your SIP server, which can interrupt services to your customers. However, you can significantly reduce such risks by configuring the firewall between OpenSIPS and the internet.

The core of openSIPS is very thin. Even the oldest version of OpenSIPS was 300 KB in size, and it can increase to a few megabytes with some modules. This feature is very useful for using it in several embedded platforms.

OpenSIPS software development has several benefits to offer. Some of the key benefits include:

OpenSIPS includes application-level functionality and has an extraordinarily flexible and customizable routing engine that combines voice, IM, and Video due to its modular design. It is easy to define the behavior of OpenSIPS using a scripting language. The concept of linking new codes also makes OpenSIPS extendable, and this new code can be easily linked at the execution.

OpenSIPS is a powerful and flexible multi-purpose signaling SIP Server. It is known for its efficient and customizable route handling, application developers, multiple carriers, and Internet telephony Service Providers (ITSPs).

The OpenSIPS server is easy to set up and can be readily integrated with several modules like a CDR module, configuration utility module, an event-based routing module, etc.

OpenSIPS software enables real-time billing and route calls at the lowest rates. Both postpaid and prepaid ratings can be set for multiple concurrent sessions with varying balance units.

OpenSIPS development enables a single server to perform multiple functions. In brief, it is fair to mention that when it comes to managing the business communication system with the utmost efficiency, OpenSIPS offers firm support. OpenSIPS software can assist companies in establishing unified communication with desired features.

Also Read: OpenSIPS vs. FreeSwitch: What is Better

If you have any queries or want to know more about the OpenSIPS Development Services, contact us at sales@ecosmob.com.