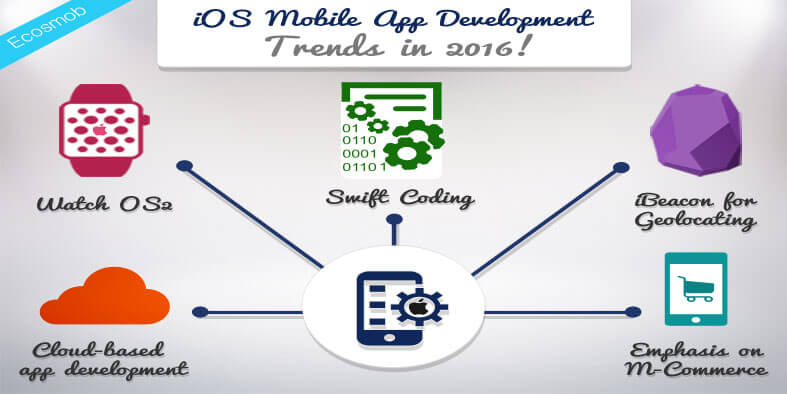 It has been a trendsetter of new technologies as it has revolutionized the way we interact with the technologies. Whether it is about any iPhone or iPad development, the Apple makes sure that it delivers high quality convenience to its users. Here, with this article, you will get to know the best iOS app development service trends that you will see in 2016. So here we go:

The Apple Watch 2 that has launched in April 2016 is being expected to be one of the pinnacles in the wearable device category. This professional iOS application development market has pushed the device dimensions to the next level. Right from making the extensions to the existing apps, there is always a new scope of development exclusively for the Apple Watch.

The Swift, one of the most popular iOS development service languages has broke almost a whole set of coding methodologies as well as frameworks that were inclusive of a number of features. This has created a buzz among both app developers of both application and system language. This trend is going to continue through 2016 and it is expected to become the primary tool for developing Apple apps while replacing Objective C which is a good change.

With the help of iBeacon technology, Apple is moving towards developing more smart applications that too that work with the location support. The iOS app development team would have the opportunity for creating much more sophisticated e-commerce apps and even m-commerce apps that will personalize services to a greater extent. Also, in order to make it truly effective, the making of iBeacon apps is done keeping in mind the less battery draining feature.

Keeping in mind a wide range of the internet users as well as online shopping customers, the Apple is now focusing to make m-commerce more easy and effective. Right from placing their orders from the mobile devices, to its delivery and tracking, the m-commerce is growing at quite a substantial rate. There are a number of Mobile technologies which already provides better incentives to the users such as beacons and many others. It can be said that, for the iOS app developers, mobile apps for eCommerce websites are a great source of income.

The cloud-support enables the app developers reducing the app size and at the same time freeing space in the limited device confines. Besides that, it enables smart sync across multiple devices. As a result, such applications are expected to gain popularity amongst iOS and OS X users this year onward.

Thus, these were some of the best ever iOS mobile app development trends that we are going to embrace this year in 2016.