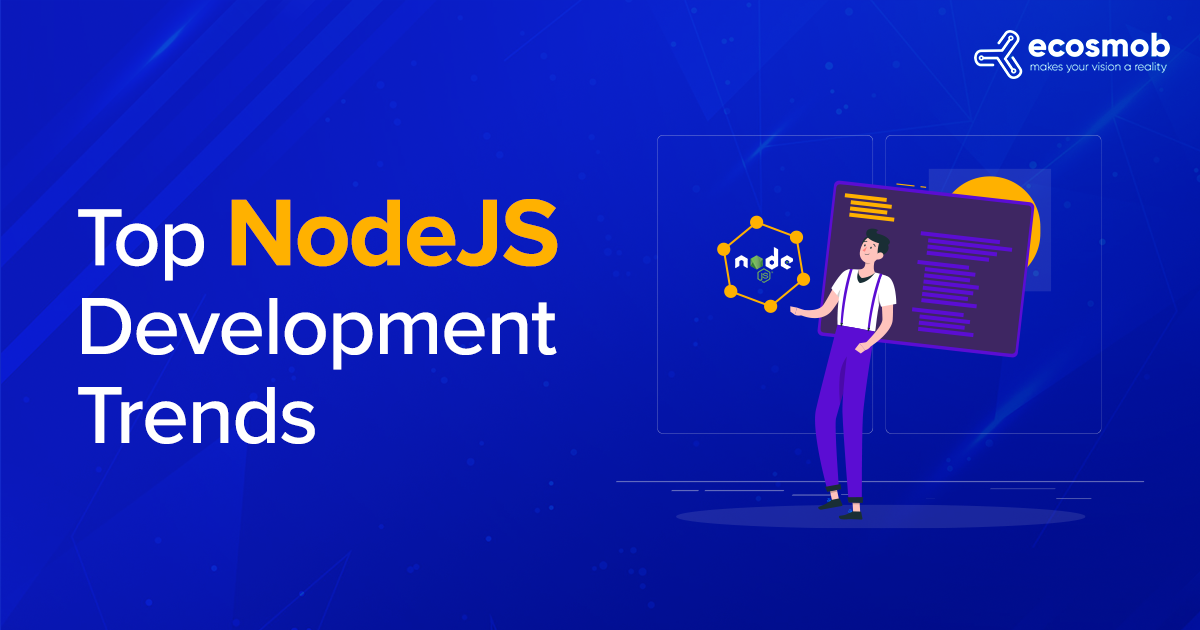 Node.js is as good as it gets to permit Node.JS development services cut short time for development of sever and client side scripts and deliver unified web apps built on a solid platform with flawless performance, reducing development cost by 58%. No wonder it is at the top of the stack of tools used by developers, a respectable 49.9%, to power over 20 million websites. Customer preferences and needs have changed over the year and several trends indicate how it will be for Node.js development in 2023. This could be a pointer to indicate what they want to Node.JS development company and get best bang for their buck.

Scalable and flexible apps are the flavor of the day. Node.js makes it possible through its single threaded asynchronous operation. More Node.JS development services are leveraging this feature of the platform with cost, efficiency and performance in view. Looks like this trend is here to stay.

Everything in real time

Well, almost. Nod.JS permits building real time applications that work like a charm and that slots in perfectly with what people expect. Take a look at live chats, social media, gaming, ad servers and stock exchanges where action is in real time or it is just no good. Node.JS is at the back of all these success stories, serving thousands of servers and IoT devices with data intensive tasks that work like a breeze, in real time, through API and web socket integrations. VoIP use is on the rise given the remote work syndrome and ecommerce transactions are on the rise. Video conferencing is in the forefront. Get zippy apps that zip through tasks by engaging Node.JS development Company.

One of the best developments that is gaining traction in the Node.JS development world is the rise of server less architecture model. Apps developed by Node.JS development company can now reduce dependence on servers. Additional benefits cover improved code quality, fast development, reduced cost and greater flexibility as well re-usability of code modules. Reuters is a typical example.

IoT may not be a buzzword as it used to be but it is still all set to play a significant role in the time to come and Node.JS is the perfect tool for IoT app development, in the hands of capable Node.JS development services. If you are going to use apps to control air conditioners, ovens, TV, lifts or doors, you can bet Node.JS will be the platform powering the app.

As Node.JS development company gains expertise it finds newer and better ways to implement Node.JS and one of these is in micro services in conjunction with the server-less architecture. Managing large projects is easier with microservices since only a section of a module needs to be modified without effecting end to end modifications.

One thing trending in the Node.JS development services world is greater use of GraphQL, a query language that accepts requests and delivers JSON response precisely crafted to the query. It can work on multiple platforms and it can streamline workflow. It even has an edge over REST API. REST query calls endpoints that results in entire data at endpoint being delivered which leads to over-fetching. You could have scalability and performance issues. GraphQL does what is required, no more no less. There are no speed bottlenecks with GraphQL. Further, since it delivers precise data you can expect analysts to deliver fine tuned insights after analytics.

Mean includes MongoDB, Express, Angular and NodeJS. MERN comprises of MongoDB, Express, React and Node.JS. The combination is powerful and powers most web app developments currently. When you merge these two you have an even more powerful foundation to deliver apps that are full-featured and yet slim and trim in operations. If you are planning to launch apps in 2023, make sure your Node.JS development company is capable of these two stack implementations.

Node.JS is powerful, open source, cross-platform JavaScript runtime tool built on Chrome’s V8 engine with quite a few features that put it in a class above competitors like React, .Net, Xamarin and Spark. Developers favor it because of its ease of implementation and fast time to market. It has come a long way since Ryan Dhal created it in 2009 aimed at delivering single thread, event loop non-blocking I/O operations which it does admirably. Node.JS development services refine as they go along and you can expect the above trends to stay. May be new ones will emerge as the community discovers more and adds to the knowledge store.